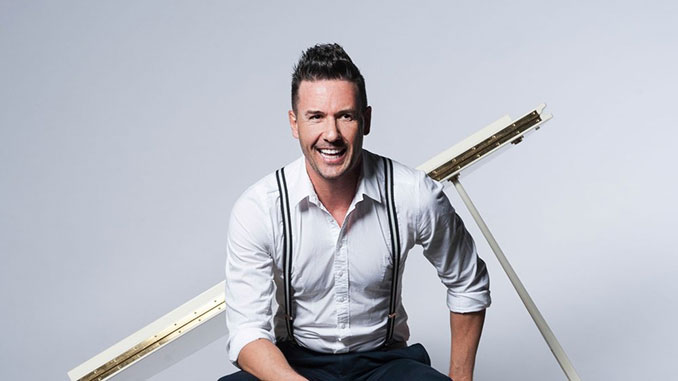 “I’ll be looking back at all seven of my solo shows and hand-picking some of my favourite fun and feel good tunes,” says Griffiths, who’ll be joined by a three piece band. “Some, like my Madonna and Annie Lennox tributes, have never been done with a band before, and I’m having fun rearranging them.”

Greatest Hits is also a nod to Griffiths’ obsession with collecting ‘Greatest Hits’ compilations on vinyl and cassette. “I’m a massive 80s tragic so there’ll definitely be lots from that decade. I love the ‘old world’ too, so there’ll be a couple from Cole Porter and a song or two from the 60s.”

After so many successful one-man shows, Griffiths has established an effortless rapport with his audiences. “I’ve learned to trust in my ability to simply chat with an audience in the moment and resist the temptation to script it all out beforehand,” he says.

“There’s a thrilling danger about flying free for an hour and that’s what I’ll be doing. It’s what I did in October last year when I performed at the Regal Theatre Opening and it was the most fun I’ve had on stage.”

“It’s trusting that there’s a little magic about meeting an audience in a room and surrendering to it. Of course, I’ll know what I’ll be singing (in theory) but no two shows will be quite the same,” said Griffiths.

Michael graduated from the Western Australian Academy of Performing Arts (WAAPA) with a Bachelor in Music Theatre in 1999 and has a Diploma in Music Composition. He has appeared in Priscilla Queen of the Desert, We Will Rock You! and Shout!

His acclaimed cabaret shows In Vogue: Songs By Madonna, Sweet Dreams: Songs By Annie Lennox, Lucky: Songs By Kylie, Adolescent, Livvy & Pete and By Request have delighted critics and audiences across every cabaret festival in Australia and beyond to New York, Los Angeles, San Francisco, London, Hong Kong, Auckland and Edinburgh Fringe.

Michael was recently announced as the inaugural artistic director of the Perth International Cabaret Festival (that kicks off in June). Michael’s also been Carlotta’s musical director for the last five years and working with the legendary drag performer has rubbed off on Michael.

“The enthusiastic audience were treated to an hour of why Griffiths is one of our cabaret shining lights… a modern-day version of a real cabaret star.” – Adelaide Fringe