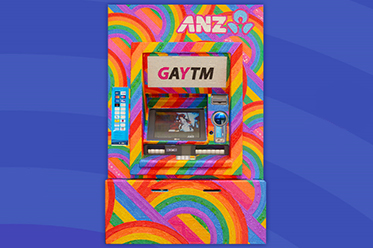 Thousands of rhinestones, facial hair and vibrant colours – not what you’re normally on the look out for when you’re hunting down an ATM. But for the duration of Sydney’s world famous Gay and Lesbian Mardi Gras, ANZ has glammed up its ATM fleet in celebration of diversity and inclusion.

ANZ has commissioned artists to individually decorate ten “GAYTMs” around Sydney to celebrate our partnership with the Sydney Mardi Gras festival. Decorated in colours, patterns and jewels inspired by LGBTI culture, each GAYTM tells a unique story.

The artworks include the Hello Sailor GAYTM, designed to celebrate the Defence Force allowing its members to march in uniform for the first time last year and Pride (pictured), representing the rainbow, a symbol of diversity, amongst others all created in partnership with the LGBTI community.

ANZ’s Pride Network promotes diversity, inclusion and respect for the bank’s staff and customers worldwide. ANZ has chosen to partner with the Sydney Mardi Gras for the eighth consecutive year, becoming the festival’s inaugural principal partner in 2014.

“This association is all about encouraging an environment where everyone feels comfortable being themselves at work,” says Mark Hand, Chair of ANZ Australia’s Diversity Council.

“You don’t get the benefits of a diverse workforce if some people are expending vast amounts of energy pretending to be something they are not and trying to conform.

“We want the best people to work at our organisation and given how many people identify as LGBTI, we want to make sure that everyone feels welcome here at ANZ – regardless of their sexual orientation or gender identity.”

ANZ is donating ATM operator fees for non-ANZ cardholders from its GAYTMs during the festival to Twenty10, a not for profit organisation that supports young people and their family and friends who are dealing with gender and sexuality issues.

As well as bringing Sydney Mardi Gras to life through each GAYTM design, the ten GAYTMs will print rainbow coloured receipts and selected ANZ ATM screens in metropolitan cities will carry messages of support for the festival.

For more information including a map of the GAYTM locations, visit: www.anz.com/gaytm for details.