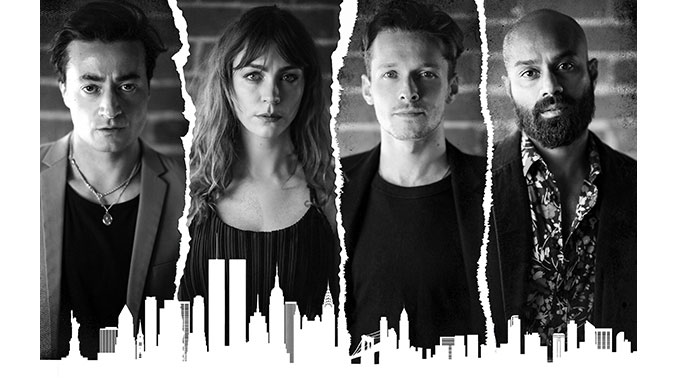 A smouldering story of love, denial, discovery and healing by one of the most vital playwrights of the twentieth century, 16th Street Actors Studio presents Lanford Wilson’s landmark play Burn This at fortyfivedownstairs from 26 January 2021.

Two unlikely strangers are brought together by a mysterious death, their connection sparks a chemistry too explosive to ignore. When Anna, a serious-minded New York choreographer meets Pale, a hothead restaurant manager, this grief-stricken pair are drawn to each other despite their better insticts.

Set against the backdrop of lower Manhattan in the summer of 1983 New York, a morally bankrupt, crime ridden city of abandoned streets and dilapidated buildings with a raging drug and AIDS epidemic, Burn This was Wilson’s attempt to create a psychic map of panic after experiencing a panic attack walking down a street in NY.

Looking to understand what was going on around him, he sat down to write and remembered a guy he’d met seven years earlier from New Jersey who became the inspiration for Pale.

Directed by Green Room and Sydney Theatre Award winner Iain Sinclair (MTC’s A View from the Bridge) and produced by 16th Street Actors Studio, this production of Burn This has been a long time in the making.

“I think the beginning of the story for me was when we brought Academy Award winning actress Ellen Burstyn to Australia nearly 10 years ago to conduct a masterclass,” says 16th Street’s Artistic Director, Kim Krejus. “Mark Diaco did a scene playing Pale. I remember when I drove Ellen home that night, she said – ‘That actor is a star’.“

“The rights to this play are rarely available and Mark has doggedly stayed on the case until they finally said yes. This is the third attempt to stage the show, the last being in May this year. He has faced every obstacle and has never given up.”

“It’s not lost on me that the world outside is changing into something new,” says Diaco. “Sometimes it’s felt as if we were living in an actual movie and the drama has superseded anything Netflix has to offer.”

“This enforced time to take stock, stop, rest and reflect has had its silver linings though, and I think it’s something that the theatre is going to benefit from as people look to leave their comfort zones. Burn This is a play about connection when we have all experienced a kind of forced disconnection.”

With a reputation as one of the best directors of contemporary American plays following his acclaimed productions of A View From the Bridge in Sydney and Melbourne, and Who’s Afraid of Virginia Woolf at Sydney’s Ensemble Theatre, Iain Sinclair says Burn This is, “Theatre for theatre lovers. It is not post-modern; it is visceral and it is a play that you burn to do.”

Burn This also marks 16th Street Actors Studio’s first foray into producing, with a mission to empower actors to shine. “Our studio is all about the actor and the play,” says Krejus. “Our focus has been on training for over ten years, and the next horizon (while still continuing training) is to create work opportunities for actors in both theatre and film. We are so delighted to be doing this at fortyfivedownstairs with this wonderful cast.”

Rounding out the cast is Jacob Collins Levy (16th Street Graduate) as Anna’s screenwriter boyfriend. Levy has had a particularly interesting journey thus far, having moved to London to star opposite Jody Comer (Killing Eve) in The White Princess before making the choice to return home to Australia due to the pandemic. This will be his stage debut.

Lanford Wilson was an award-winning American dramatist, writer of 22 plays and co-founder of the Circle Repertory Theatre in New York, which became the leading producer of new American plays. He is often grouped with fellow dramatists David Rabe, David Mamet and Sam Shepard in being responsible for a new and muscular ‘Mid-American’ voice in the 1970s/80s.

Nominated three times for the Tony Award, and winning the Obie Award five times, his plays include: Talley’s Folly (winner of the 1980 Pulitzer Prize for Drama), Fifth of July (Tony Award nomination for Best Play, 1981), and Book of Days. Wilson died in 2011.