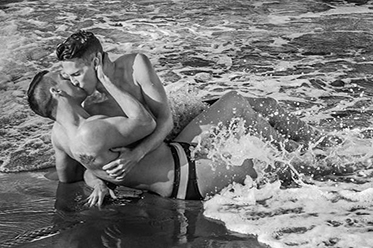 Iconic film posters from Gone with the Wind, From Here to Eternity and Roman Holiday have all been given an LGBTIQ makeover for Brisbane Queer Film Festival 2014’s campaign. However, the Brisbane City Council has deemed one of the three posters ‘too explicit’ for display.

“We are mindful of the community’s views and believe that one of the three posters may be seen by many as too confronting,” she said. “I have been advised that, in the meantime, an alternate billboard design will be used, and a review would be conducted by the Advertising Standards Board.”

The ‘queering’ of classic film posters was a deliberate choice according to festival producer Troy Armstrong, designed to raise questions in the community about film and traditional gender roles.

“The visual campaign has been a great way to get people to question LGBTIQ representation in films and ask the question “what are our community’s favourite love stories? Hopefully everyone in Brisbane will see the images and reflect on what they consider LGBTIQ love stories to look like.”

Drag queen Vollie la Vont and Harry K take on the roles made famous by Vivien Leigh and Clark Gable from Gone with the Wind, DJ ISH and Jane Fuller replace Audrey Hepburn and Gregory Peck from Roman Holiday and Gregory Dunn and Jake Harrison recreate Deborah Kerr and Montgomery Cliff’s magical kiss in the surf in From Here to Eternity.

Brisbane Queer Film Festival’s 2014 ambassadors will also be involved in the festival in a variety of ways. Vollie La Vont, Gregory Dunn, Harry K and DJ ISH will headline the opening and closing night parties, Jane Fuller will host the Camp Beaverton: Meet the Beavers Q and A session and My Kitchen Rule’s Jake Harrison will be creating a post-film marathon breakfast feast for Camp Out attendees.

Brisbane Queer Film Festival celebrates its 15th anniversary in 2014 and features international and Australian films, an anniversary screening of The Adventures of Priscilla: Queen of the Desert, a beach- themed ‘Love Shack’ opening night party, the Drag-a-thong Priscilla-themed closing night party, artist and community Q and As and an inaugural 12-hr movie marathon complete with sleepover in the Powerhouse Theatre with Camp Out.