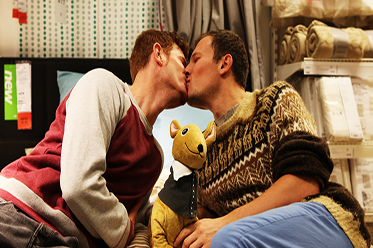 The claim that homosexual men share a “gay gene” created a furore in the 1990s. But new research two decades on supports this claim – and adds another candidate gene.

To an evolutionary geneticist, the idea that a person’s genetic makeup affects their mating preference is unsurprising. We see it in the animal world all the time. There are probably many genes that affect human sexual orientation.

But rather than thinking of them as “gay genes”, perhaps we should consider them “male-loving genes”. They may be common because these variant genes, in a female, predispose her to mate earlier and more often, and to have more children.

Likewise, it would be surprising if there were not “female-loving genes” in lesbian women that, in a male, predispose him to mate earlier and have more children.

Evidence for ‘gay genes’
We can detect genetic variants that produce differences between people by tracking traits in families that display differences.

Patterns of inheritance reveal variants of genes (called “alleles”) that affect normal differences such as hair colour, or disease states such as sickle cell anaemia.

Quantitative traits, such as height, are affected by many different genes, as well as environmental factors.

It’s hard to use these techniques to detect genetic variants associated with male homosexuality, because many gay men prefer not to be open about their sexuality. It is even harder because twin studies show that shared genes are only part of the story; hormones, birth order and environment play roles too.

In 1993, American geneticist Dean Hamer found families with several gay males on the mother’s side, suggesting a gene on the X chromosome. He showed that pairs of brothers who were openly gay shared a small region at the tip of the X, and proposed that it contained a gene that predisposes a male to homosexuality.

Hamer’s conclusions were extremely controversial. He was challenged at every turn by people unwilling to accept that homosexuality is at least partly genetic, rather than a “lifestyle choice”.

Gay men were divided: it vindicated the oft-repeated claims that “I was born this way” but also opened frightening new possibilities for detection and discrimination.

Similar studies gave contradictory results. A later search found associations with genes on three other chromosomes. This year, a larger study of gay brothers, using the many genetic markers now available through the Human Genome Project, confirmed the original finding, and also detected another “gay gene” on chromosome 8. This has unleashed a new flurry of comment.

But why such a furore when we know of gay gene variants in species from flies to mammals? Homosexuality is quite common throughout the animal kingdom. For instance, there are variants that influence mating preference in mice and a mutation in the fruit fly makes males court other males instead of females.

Is the ‘gay gene’ really a ‘male-loving allele’?
The puzzle is not whether “gay genes” exist in humans, but why they are so common (estimates from 5-15%). We know that gay men have fewer children on average, so shouldn’t these gene variants disappear?

There are several theories that account for the high frequency of homosexuality. A decade ago I wondered if gay gene variants have another effect that boosts the chances of leaving offspring (“evolutionary fitness”), and passing the gay allele on.

This is a well-known situation (called “balanced polymorphism”) in which an allele is advantageous in one situation and not in another. The classic case is the blood disease sickle cell anaemia, which leads to disease and death if you have two alleles, but to malaria resistance if you have only one, making it common in malarial regions.

A special category is “sexually antagonistic genes” that increase genetic fitness in one sex, but not in the other; some are even lethal. We have many examples across many species. Maybe the gay allele is just another of these.

Perhaps “male-loving” alleles in a female predispose her to mate earlier and have more children. If their sisters, mother and aunts have more kids who share some of their genes, it would make up for the fewer children of gay males.

I am surprised that this work is not better known, and its explanatory power is neglected in the whole debate about the “normality” of homosexual behaviour.

How ‘normal’ are gay alleles?
We have no idea whether these genetic studies identified “gay alleles” of the same or different genes. It is interesting that Hamer detected the original “gay gene” on the X, because this chromosome has more than its fair share of genes that affect reproduction, but I would expect that there are genes all over the genome that contribute to mate choice in humans (female-loving as well as male-loving).

If there are male-loving and female-loving alleles of tens or hundreds of genes battling it out in the population, everyone will inherit a mixture of different variants. Combined with environmental influences, it will be hard to detect individual genes.

It’s a bit like height, which is influenced by variants in thousands of genes, as well as the environment, and produces a “continuous distribution” of people of different heights. At the two extremes are the very tall and the very short.

In the same way, at each end of a continuous distribution of human mating preference, we would expect the “very male-loving” and the “very female-loving” in both sexes. Gay men and lesbian women may simply be the two ends of the same distribution.

Born this way? An evolutionary view of ‘gay genes’
By Jenny Graves, La Trobe University – Jenny Graves has received funding from the ARC and NHMRC. She is not associated with any organisation that would benefit from this article.