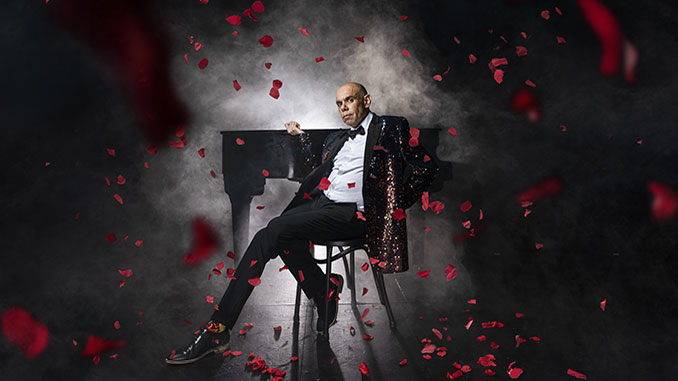 A comedy cabaret based on his life, comedian and TV personality Steven Oliver will premiere Bigger & Blacker at La Boite Theatre this March!

With an original score by Oliver, Bigger & Blacker combines comedy and contemplation with saucy stories, reflections on love and loss and a candid look at the downside of fame.

The star of ABC hit TV series Black Comedy is excited to bring his self-penned cabaret to Brisbane, performing his first solo season in the state.

“I’m delighted to be doing a solo season in Brisbane after living here for 22 years. I frequently work interstate, but not often in Brisbane, so this three-week season holds a special place in my heart,” said Mr Oliver.

“When I moved to Brisbane in 1998, my first professional theatre production was at La Boite, and in 2019, my play, From Darkness, had a season at the theatre. Now, I’ll be on the mirror side and taking people on a journey, experiencing my relationship with the theatre space in a whole new way, which is a beautiful connection.”

Musical Director and Helpmann-Award winner Michael Griffiths is thrilled to accompany Oliver onstage behind the keys, after joining the first iteration of Bigger & Blacker at Adelaide Cabaret Festival in 2019.

“Originally it was only Steven and I testing the waters and taking a leap of faith, but now we’re performing at La Boite with a talented team,” said Mr Griffiths.

“Through music, Steven tells stories of his lived experiences and together we share terrific songs – nothing is pre-recorded or artificial. Audiences can expect to have a good laugh, be impressed by the music and come away feeling like they’ve opened a window into another life.”

“It’s a full-circle moment to work with Oliver in this capacity, after bringing his play, From Darkness, to the stage in 2019, and now presenting his comedy cabaret. We’re beyond excited to work with him again, alongside a passionate and dedicated creative team,” said Ms Spatz.