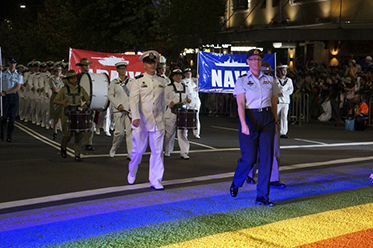 The Australian Defence Force has been ranked 5th in an international study assessing the integration of lesbian, gay, bisexual and transgender service members.

The LGBTI Military Index ranked New Zealand, the most progressive nation in the world, with Netherlands and the United Kingdom ranked joint second. While Australia, Canada, France and Sweden are well placed, the United States Army was ranked 40th in the Index. Arab and African countries make up much of the index’s lowest rankings, with Nigeria coming in last, joined by Iran, Zimbabwe, Uganda and Saudi Arabia.

The Hague Centre for Strategic Studies (HCSS) conducted the research at the request of the Dutch Ministry of Defence as a way of marking the 40th anniversary of the Netherlands becoming the first military in the world to allow LGBT individuals to serve openly in the armed forces.

The LGBT Military Index ranked over 100 countries in an instant, transparent, systematic, and comparable overview of 19 policies and best practices. The Index  is an invaluable resource for policymakers, stakeholders, and advocates interested in promoting greater inclusion of LGBT personnel within armed forces.  Advancing diversity is critically important for defence organizations to survive and thrive in the 21st security environment.

Indicators that make up the Index include the presence of anti-discrimination policies regarding sexual orientation and gender identity; the representation of the armed forces at LGBT Pride events; and whether the military officially supports a Joint Statement of the United Nations Human Rights Council on the rights of LGBT persons.

The HCSS study spearheads a new generation of research on LGBT service. Valuing the differences of individual service members and integrating them into the way the armed forces work is a matter of dignity and human rights for those willing to risk their lives for their country.