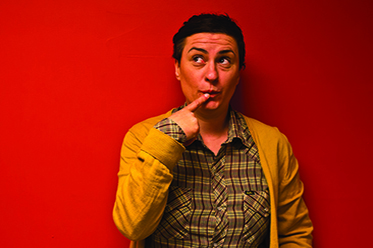 Feast Festival – Adelaide Queer Cultural Festival has launched the program for the 2013 Festival, which will see Adelaide come alive for 16 days and nights from 9 – 24 November.

“I am looking forward to seeing everyone mixing it up and mixing in, at our Feast Festival in November as we celebrate with our talented and diverse (LGBITQ) Queer artists and community,” said Artistic Director, Catherine Fitzgerald.

“There is something for everyone. Everyone is welcome. We are proud and out and would love you to also come and share, celebrate with us.”

With artistic disciplines including physical performance, cinema, visual art, cabaret, community forums, youth activities, sporting events and free community activities; there is something for everyone at Feast 2013.

Highlights include renowned Melbourne comedian Thomas Jaspers, who will be causing hysterical laughter in two fantastic shows. Jaspers will be presenting a camp romp through suburban childhood in his solo show, No Place Like Homo.

Jaspers also joins Brendan Maclean, Nath Valvo and a collection of very special guests for a night of stand-up, music and booze in TWUNKS (past tense of twinks), a highlight of Melbourne’s 2013 Midsumma Festival.

Adelaide’s songstress and vocal virtuoso Libby O’Donovan, will grace the Feast stage presenting her new solo show, Songs Only a Mother Could Love. She will also appear in a very special performance with Feast Ambassador and music superstar Beccy Cole.

Another highlight will undoubtedly be Australia’s only female mentalist, Cath Jamison, who will explore bizarre dating rituals and the “feminine mystique” with her trademark sass, style and mind manipulation.

At the grand old age of eighty and a bit, Roger Shepard has been the gold standard of Adelaide drag for over half a century. Roger will sit at the make-up table and transform into the glamorous Rouge before your eyes while sharing secrets of his art and stories with another larger than life personality Peter Goers.

Feast and Cabaret Festival favorite, the irrepressible Hans, will terrorize audiences as he celebrates his 10th Birthday as a triple threat thespian in Han’s 10th Birthday Party. This party promises to be the biggest celebration since the Berlin Wall came down.

For literature and theatre lovers, Feast will present Great Lesbian and Gay Writers – Our Inheritance. Featuring twenty intimate readings, this is a unique opportunity to listen to leading South Australian actors reading lesbian and gay writers from the remote and recent past in the beautiful and elegant Mortlock Chambers at the State Library of South Australia.

Celebrate the best of Queer Cinema with Feast’s film program at the Mercury Cinema featuring over 22 Australian and international films, including 7 Australian and 20 South Australian premieres.

Valentine Road is a true story following the horrific school yard shooting of 15 year old school boy Larry King in 2008, who was shot dead in cold blood after asking another boy to be his valentine in a suburban schoolyard in California.

Iranian director Negar Azarbeyjani brings the story of an unlikely and daring transgender friendship that develops despite social norms and religious beliefs in Facing Mirrors.

GBF (Gay Best Friend) is a witty and hilarious coming of age story from director Darren Stein; while James Franco and Travis Matthews’ controversial Interior. Leather. Bar re-imagines the 40 minutes cut from the cult classic Cruising, in an examination of sexual and creative freedom.

Feast is also presenting a very special screening of the gender bending classic Some Like It Hot, with a special introduction by Dr Vicky Crowley. These are just some of the amazingly varied selection offered as part of this year’s Feast film program.

As part of Movable Feast – Metro & Regional there will be a number of events taking place outside of the CBD, including: PORT/ABLE – a group exhibition of emerging talents in the quirky old Port Sailing Club (now Gallery Yampu); and the Port Adelaide Comedy/Cabaret Night, hosted by Port Adelaidian Lori Bell, promises to be a night full of song, comedy, food and fun.

In 2013 Picnic in the Park returns to the park, in the picturesque setting of Tulya Wardli (Bonython Park) offering the opportunity to relax and chill at the end of the festival.

The family friendly picnic will include live entertainment from some of Adelaide’s hottest talent, Feast’s tug of war, the dog show, silent disco, face painters, community stalls and plenty of delicious food – best of all, it’s free!

The Hills Garden Tour is back by popular demand – a perfect day out featuring 3 inspirational gardens; and for the many Queer Adelaide Hills dwellers there will be the Adelaide Hills Soiree, a chance to get together over some good food and wine at Silvia Hart’s Café.

This is just the tip of the iceberg for Feast Festival 2013 and there is still much, much more to discover within the festival program. For more information, visit: www.feast.org.au for details.

Image: Monologue of a Deaf Woman