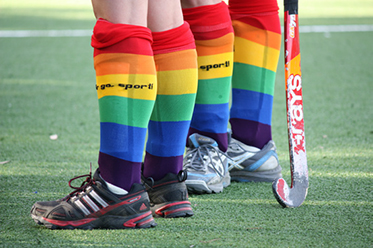 A survey has found many gay and lesbian Canberrans have experienced homophobic behaviour or bullying on ACT sporting fields. The ACT Government’s Inclusive Sport Survey Report has gauged the experiences of lesbian, gay, bisexual, transgender and intersex (LBGTI) people in the ACT.

More than 300 people took part in the survey, which has found more than 40 per cent of gay, lesbian or bisexual Canberrans have felt unsafe in a sporting environment. It also reports that 32 per cent of those surveyed had experienced verbal homophobia or bullying in sport.

ACT Sports and Recreation Minister Andrew Barr, who is openly gay, says the results are unacceptable and paint a concerning picture about the level of fear and inclusion within sport.

“I think it’s probably less so in the ACT than in other parts of the country but it is a bit of a wake-up call to just how many people feel excluded from participation,” he said.

The results of the survey will be used by sporting clubs to help increase gay and lesbian participation and improve experiences. Mr Barr says it is also up to the individual to stamp out homophobia.

“Whenever there is homophobia or casual transphobia, challenge it within your sporting organisation, your club,” he said. “Challenge it, speak up, be inclusive.”

Capital Football director Heather Reid has welcomed the initiative. “It’s very important that we take a strong stance as have the five professional football codes,” she said.

The survey report makes several recommendations including the provision of guidelines to sport and recreation providers, to encourage participation of transgender and intersex people.

It also calls for support for sporting organisations, so they can seek out opportunities to host sporting events that are specifically for, and inclusive of the LGBTI community.

Image: courtesy of The Sport Experiences of Lesbian, Gay, Bisexual, Transgender and Intersex People in the Australian Capital Territory Report