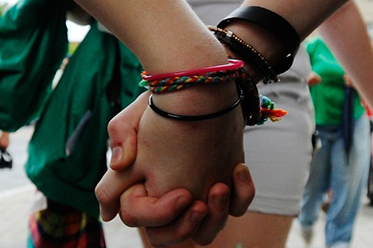 A new study has found that 16% of young people who identify as Lesbian Gay Bi Trans Intersex or Queer (LGBTIQ) have attempted suicide and 33% have harmed themselves as a result of widespread homophobic and transphobic harassment and violence in Australian society.

More than 1000 young people aged between 16–27 years of age participated in the national research study, with almost two-thirds reporting homophobic or transphobic harassment or violence across different aspects of their lives, including in schools, families, the workplace, the streets and other public sites, such as sporting events.

Homophobia and transphobia are terms used to describe bullying, hostility and discrimination against people based on sexuality diversity and gender variance. The research also found:

Young and Well CRC CEO Associate Professor Jane Burns said: “The findings of this study overwhelmingly highlight the serious impact of homophobia and transphobia, particularly when you consider that 42% of those surveyed had thought about self-harm and/or suicide.”

“This research suggests that LGBTIQ young people are around six times more likely to consider taking their own life than their heterosexual peers, reflecting similar findings in other research in this area.”

“While there are a small number of fantastic community organisations providing support and guidance to young people identifying as LGBTIQ, such as Twenty10 incorporating the Gay and Lesbian Counselling Service NSW, much more needs to be done by way of education and training so that this dire impact on the mental health and wellbeing of these young people can be eliminated.

“Technology has a huge part to play here: the research shows 85% of young people used the internet to explore their sexual or gender identity on sites like Minus18, Tumblr, Facebook and YouTube, and 78% of young people felt accepted, 66% felt they could find others like themselves, 60% felt safe and 57% could feel proud of their sexuality in that space,” A/Prof Burns said.

“This research clearly demonstrates the need for greater community education, training of educators, doctors and health professionals about the health and wellbeing issues facing young Australians who are gender variant and sexuality diverse,” she said.

Brett Paradise, Executive Director of Twenty10 incorporating GLCS NSW, praised the research: “Our experience working directly with young people of diverse genders, sexes and sexualities frequently highlights the negative impact of transphobia and homophobia has on their wellbeing, and this research has provided some well overdue evidence.’

This research report is part of a larger suite of resources, including five discrete short documentary-style video clips titled Growing Up Queer, which address issues of identity, family relationships, homophobia/transphobia, and sex education.

These resources have been developed in collaboration with young participants involved in the research, including the development of a play script/scenario, based on research findings, to be used as an interactive professional development resource for those working with young people. The play will be piloted later this year.

For more information and to download a copy of the Study, visit: www.yawcrc.org.au for details.